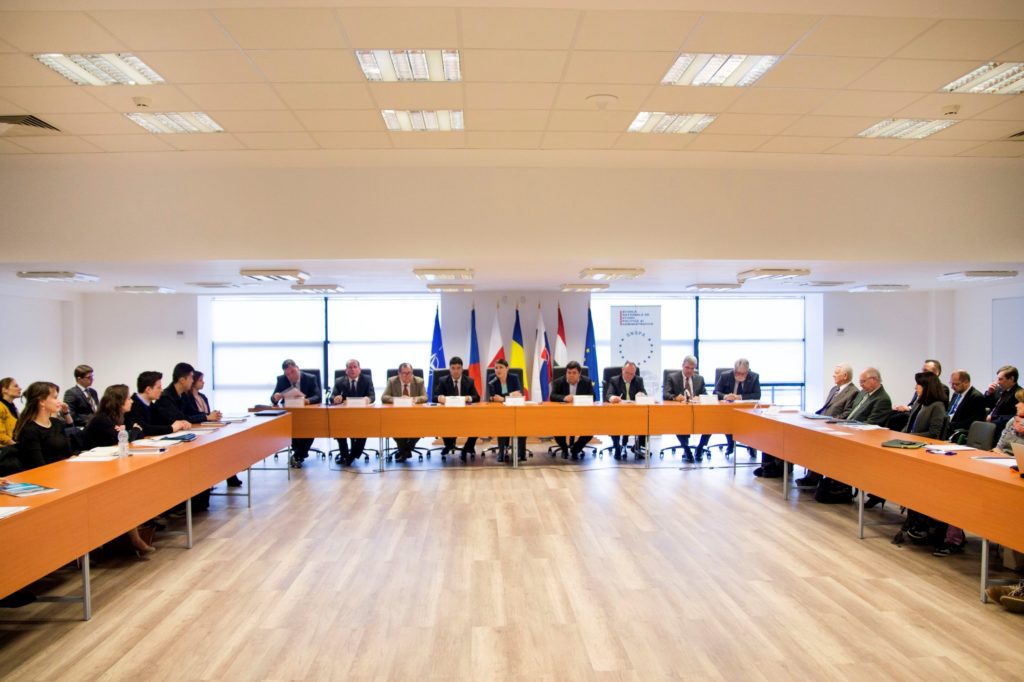 “V4 and Romania: 25 Years since the Fall of Communism” International Student Conference was the main aim of our general meeting. It was primarily organized by Visegrad Fund with the kind support of College of European and Regional Studies (Czech Republic), Antall József Knowledge Centre (Hungary), University of Lodz (Poland) and Pavol Jozef Šafárik University in Košice (Slovakia). Divided into several panels, it contained current security issues in Central Eastern Europe, impact of the fall of the Communism over the political system, transition process in CEE, communist legacy in the social systems of the region, economic transition and European integration.

The most vivid discussion on the 1st conference day was provoked concerning the war conflict in Ukraine and its presence on the world daily agenda. Nobody knew the formula for the conflict solution, but everybody has felt in a different way the threat originating from Kremlin. Ivan Gavryliuk, my Ukrainian colleague and fellow, who is currently living and doing his PhD in Poland, contributed with the pressing topic on the private armies in Ukraine that are fighting nowadays in ‘ATO’ area in Donbass.

The striking thing I’ve heard at the conference was the Romanian notion of ‘crisis in Ukraine’. All graduate students from the host university used to repeat it all the time without any discrete clarification that can only prove the Russia’s propaganda impact over the Romanian mass media and society respectively. I’ve managed to comment and discuss several times before the audience, explaining the difference between Russian-Ukrainian war in general (it includes the seizure of Crimean peninsula in March 2014 by Russian armed forces without any identifying signs, so-called ‘little green men’, and all further developments) and war conflict in Donbass particularly.

As I saw, people do need the full comprehension of Ukrainian events and context, that’s why I’ve recommended to them some usable websites, where Russian lies and fake news are permanently exposed by Ukrainian media experts and journalists.

There were also ambassadors of Visegrád Group countries to Romania, who delivered the welcoming speeches to conference participants emphasizing new challenges for the region. Marek Szczygieł, the Ambassador of Poland to Romania, stated the Polish position on Ukrainian issue, fair and straight by affirming “Russian aggression in Ukraine” and “preservation of our common values”.

My paper presented on the panel about transition process in Central Eastern Europe touched upon the issue of parks of Communism in EU member states, especially former Warsaw Pact countries and USSR republics, namely Lithuania, Latvia and Hungary. In my opinion, it is very urgent topic, because these parks are used for historical policy representation with some combination of kitsch, forming special perception of Communist era in aforementioned countries. During the panel one girl from the Czech Republic told that Ukrainians are the “real threat for Czech security strategy” that compelled me to convince her of the ambiguity of these words, using the international law arguments and my own historical background. The main point is that Ukrainian migrants come to the Czech Republic since early 90s, so for long-range outlook Ukrainians can even reinforce the Czech labor-market.

On the 2nd conference day we had only two panels, one of whom, namely on economic transition and European integration in Central Eastern Europe, has moderated Victor Negrescu, Member of the European Parliament from Romania, Social Democratic Party representative. “Romania is very involved in its relations towards Ukraine. It’s a big supporter of the democratization process going on in Ukraine and Ukrainian territorial integrity. We are in the European Union one of the countries that is supporting the idea that EU should get more involved in resolving the conflict taking place in Ukraine now, and finding peaceful solution for the current situation. Romania sees its intervention in Ukraine mainly as the civil intervention in helping Ukraine, stabilize economically and also politically. I think the only solution to resolve any type of conflict is the diplomatic way, making countries and people communicate more. It’s clear that people have lived in Eastern Ukraine for several years without any problems. The only solution is to facilitate the step of communication in order to make the mobility of people all of Europe and in Ukraine, Russia especially. Unfortunately I don’t see the solution for the Ukrainian conflict taking place very soon, it will last for years”, MEP says in my interview with him after the panel.

I should also mention kind reception at the Ambassador of Slovakia to Romania residence (because of Slovak presidency 2014/2015 of the Visegrád Group) and visit to the Palace of Romanian Parliament, the second biggest building in the world, the memorial to Nicolae Ceaușescu’s epoch, who was the genuine ‘Romanian Stalin’.