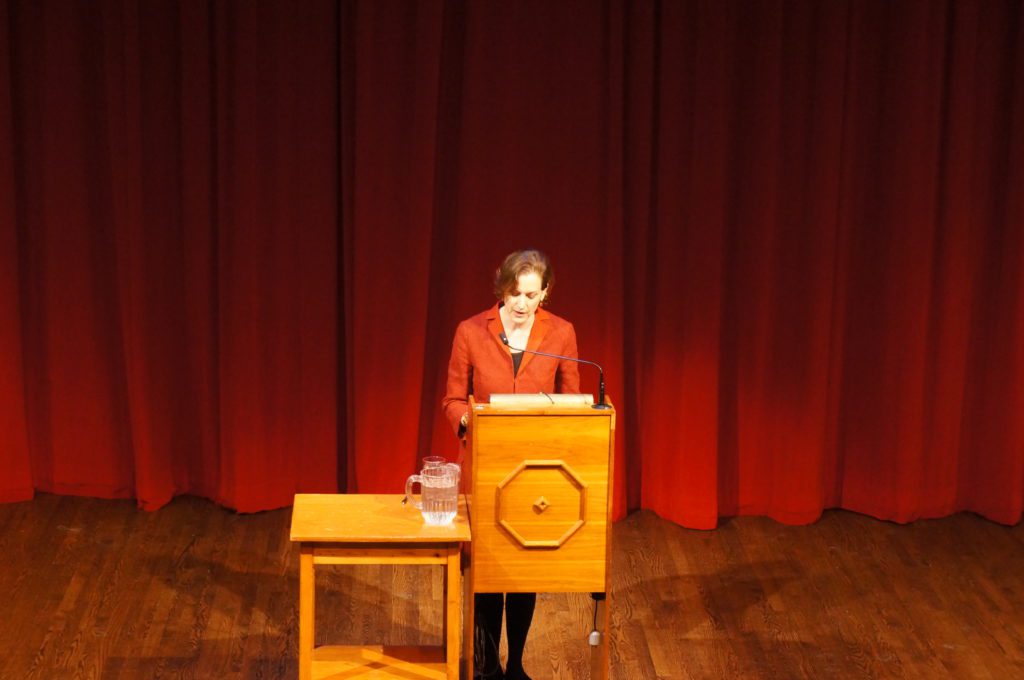 27 October 2014—The Toronto Annual Ukrainian Famine Lecture was delivered this year on October 9 by the celebrated writer Anne Applebaum, who spoke on the Holodomor and its relation to current events in a talk titled “Why Stalin Feared Ukraine and Why Putin Fears It Today.” The event was organized by the Holodomor Research and Education Consortium of the Canadian Institute of Ukrainian Studies (Toronto office), University of Alberta; the Petro Jacyk Program for the Study of Ukraine; the Canadian Foundation for Ukrainian Studies; and the Centre for Russian and East European Studies at the University of Toronto.

Ms. Applebaum writes on history and politics in Eastern Europe, Ukraine, and Russia and is a columnist for The Washington Post. Her book Gulag: A History won the Pulitzer Prize for non-fiction in 2004. Her most recent book, Iron Curtain: The Crushing of Eastern Europe, 1944–1956, won a number of prestigious prizes, including an Arthur Ross Silver Medal from the Council on Foreign Relations and the Cundill Prize for Historical Literature. She is currently writing a book on the Holodomor.

Ms. Applebaum began her presentation by describing how Josef Stalin’s early career later shaped his policies in Ukraine. In 1918, she explained, he was sent to Tsaritsyn, present-day Volgograd, where he was responsible for grain requisitions. He took over the local secret police, closed the local newspapers and executed railway engineers as “class aliens.” As he would do many times later, Stalin invented a counter-revolutionary conspiracy as a pretext for using violence against those who disagreed with him. Ms. Applebaum explained that throughout his career, he dealt with crises using extra-legal, extra-judicial “revolutionary methods,” adding, “The more violence he used, the more grain he could acquire. And if the price of triumph was extremely high, and the costs of violence extraordinary – that could be covered up later on.”

Stalin learned not only from successes but from failures as well, the most significant being the civil war in Ukraine. He knew first hand of the two failed attempts by the Bolsheviks in Ukraine, having served as Lenin’s representative there. Armed groups had been sent into villages to collect grain “owed” to the state, a method that fueled resentment, a massive peasant rebellion and a counter revolution that in 1919 came close to succeeding. Ms. Applebaum asserted that this close call was long remembered by communist officials. “The prevention of another Ukrainian peasant uprising was absolutely at the center of their concerns,” she said.

Ms. Applebaum argued that the experience left its mark on Stalin, who referred to it repeatedly in the early 1930s as his collectivization policy floundered, producing not only anger and open resistance but also lower crop yields. In the summer of 1932 he wrote Lazar Kaganovich, his representative in Ukraine: “The most important issue right now is Ukraine. … There is talk that in two regions … about fifty district party committees have spoken out against the grain-procurements plan, deeming it unrealistic.” 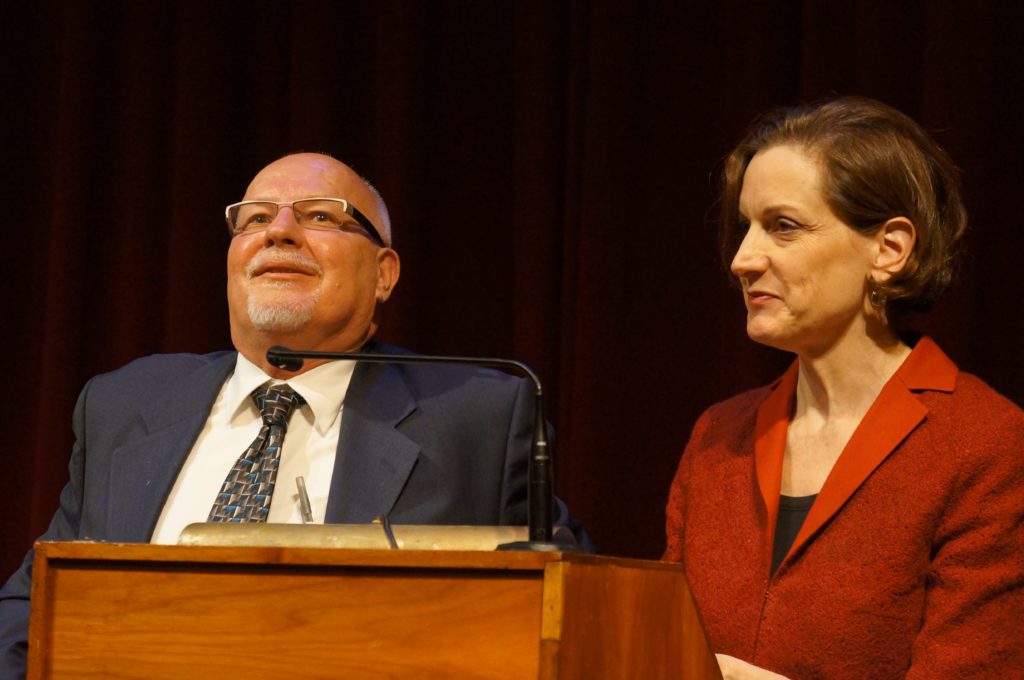 Ms. Applebaum continued quoting from Stalin’s letter, in which he complained about the influence of Poles and Ukrainian nationalists alleged led by Symon Petliura. Stalin ordered Kaganovich to remove Ukrainian party leaders and to transform Ukraine into “a real fortress of the USSR, into a genuinely exemplary republic,” and ended by writing, “without these and similar measures … we may lose Ukraine.”

Losing Ukraine was unthinkable, and Stalin turned to the kind of extreme repressions he had deployed in Tsaritsyn. Soldiers were sent to villages to confiscate not only grain but vegetables, fruit and livestock. “By the spring of 1933 whole villages had fallen silent as every single one of their inhabitants starved to death,” she said. To turn Ukraine into a Soviet “fortress” entailed targeting not only the rural population but also the Ukrainian language and culture. A legacy of these policies is that many Russians were convinced that Ukraine was not a real nation and not significantly different than Russia, Ms. Applebaum said.

Turning to Putin, Ms. Applebaum suggested that Ukraine represents an existential threat for the Russian president, as it had for Stalin before him. According to Ms. Applebaum, Stalin understood that Ukraine, with a population suspicious of centralized authority and attached to its land and traditions, was different than Russia. Putin, on the other hand, is afraid because a country he sees as indistinguishable from Russia is promoting ideas of freedom, democracy, and the West. “If Stalin feared that Ukrainian nationalism could bring down the Soviet regime, Putin fears that Ukraine’s example could bring down his own regime, a modern autocratic kleptocracy,” she said.

In 1989 when he was a young KGB officer posted to East Germany, Putin saw terrified KGB and Stasi colleagues burning their files. He watched with horror as crowds filled the streets, instigated, he believed, by forces in the West. These were formative and cautionary events for Putin just as the civil war in Ukraine had been for Stalin.

Ms. Applebaum spoke of Putin’s perfection of “managed democracy,” which includes the creation of fake political parties and state-managed “civil society organizations” to create the impression of pluralism and democracy. “The result is a system that appears to lend legitimacy to the ruling clique but which never allows it to be actually threatened,” she said. Such methods never entirely worked in Ukraine. When In 2004, elections results were falsified in favor of presidential candidate Yanukovych, the Orange Revolution erupted. As in Dresden in 1989, Putin saw “his” people – pro-Russian politicians funded by Russia and controlled by Russian security officers – threatened by democratic forces. After demonstrations in Moscow in 2011, Putin worked to ensure that no “color revolution” could take place in Russia, eliminating independent media and any real Russian opposition. He must have been horrified by the eruption of Ukraine’s Euromaidan revolution in 2014.

Ms. Applebaum posited that what Putin is fighting against is “not NATO tanks, but popular discontent, public questioning of Putin’s personal wealth, open criticism of the basic tenets of Putinsim, and of course political demonstrations of the sort that created the Orange Revolution in Ukraine, the Moscow demonstrations of 2011, and, above all, the second Maidan in 2014.” Putin’s aggression in Ukraine is fueled by his fear of losing power and what Russian public reaction would be to Putin’s villas, yachts, and so much else. She noted, “The protection of this personal property is so important to Putin that he is willing to risk everything, including the economic stability of his country, in order to protect it.”

As for Stalin before him, Ukraine represents instability, anarchy and resistance to Putin’s regime. Vladimir Putin, who witnessed a transition from dictatorship to democracy in East Germany, “knows that the successful westernization of Ukraine, even the creation of a relatively democratic, relatively prosperous and relatively well integrated Ukraine, is a dire danger for him as well.”

Ms. Applebaum ended by noting that the problem for Ukraine is that Russian leaders see it as a factor not in their external diplomacy but in their internal politics. Like Stalin before him, Putin fears revolution in Ukraine as a threat not only to Russia but to his own political survival.