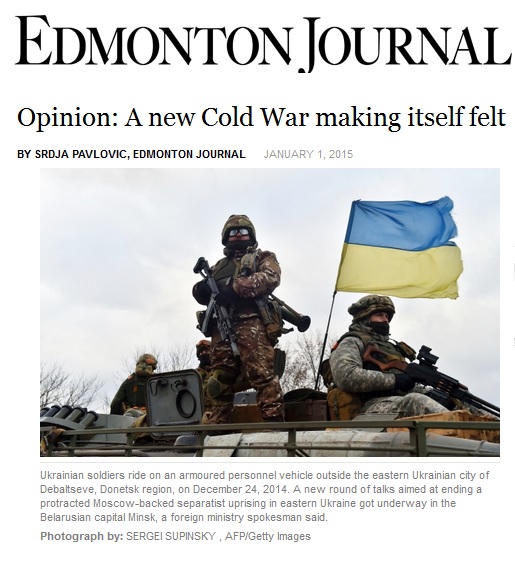 In “A new Cold War making itself felt” (January 1, 2015), Srdja Pavlovic interprets the events in Ukraine as part of a new cold war driven by the West, a view similar to that promoted by the Kremlin. Missing in this interpretation is any consideration of what the Ukrainian people and its leadership want. Basically, Ukrainians have shown over the past year that they want closer ties with the EU, a more democratic and transparent political system, and corruption brought under control. They have been supported in this by the West. However, Russia has opposed Ukraine’s choices, not only through political and economic means but also by instigating violence in eastern Ukraine and through direct military action. At the same time, its aggression is being justified in a propaganda war, where the victim, Ukraine, and the West are being blamed for the conflict in eastern Ukraine as well as for the chill in relations between Russia and the West. It is not the West but Putin and Russia’s leadership that have been driving the war in Ukraine by providing “volunteers” and regular army units to fight there, as well as military equipment to aid pro-Russian rebels. It has been difficult to find a political way forward because Putin has shown himself, time after time, to be deceitful and unreliable. The conflict in eastern Ukraine and the new cold war exist today not through the fault of Ukraine or the West but because Russia’s leaders have shown that they prefer this state of affairs to abandoning their goal of reinstating control over Ukraine.