Elena Volkava. Victory Over the Sun 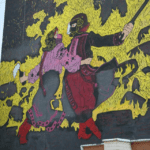 Can art put an end to conflict? Not directly, perhaps, but it can become a mechanism for expression, raising awareness and provoking reactions from the audience. Furthermore, it can promote healing, truth, documentation and accountability for injustices committed during conflict. Art of resistance can be manifested in street graffiti, open-air installations, photography, and theater, among other forms. Such creative actions have taken place in various conflicts. In the war between Palestinian Hamas and Israel, while many have given up on reaching a peaceful solution, others still see hope, like George Ibrahim, the founder and director of Al-Kasaba Theater in Ramallah, Palestine. Ibrahim stated, “Culture and creativity have to have a place. It’s difficult, but otherwise everything is lost.” In the case of the recent military invasion of eastern Ukraine, resistance art emerged even before the conflict and continues to do so. For instance, a group of artists associated with Izolyatsia, a Donetsk organization that has engaged the local community through creative initiatives over the past four years, was forced to flee the region as separatists seized their main facility in June. Another graffiti artist from Donetsk, Sergey Zakharov, displayed cardboard caricatures depicting leaders of the so-called “Donetsk National Republic” (DNR) and strategically placed the images on the walls of prominent DNR compounds. Afterwards, Zakharov was tortured by the rebels and kept in detention. Although his works were taken down soon after placement, passers-by took photos, which spread on social media. In collaboration with Ukrainians from different regions, exiled artists continue to apply creative nonviolent tactics in order to create a space for expression, reconciliation, and healing.

A common perception is that Ukraine is culturally divided, particularly along lines of language and ethnicity. While there is some truth to that, the situation is not simply black and white. The war of aggression in eastern Ukraine is a product of an elaborate, multi-year propaganda campaign prepared by the Russian state actors. For the last four years, brave Ukrainians from Donetsk challenged the status-quo though Izolyatsia. Even though their physical space was seized, Izolyatsia’s network remains active, working to make the voices of refugees heard and to expose through art the truth about the state of affairs in the country. According to UN data from November, there are officially 460,365 internally-displaced people in Ukraine.

Several years ago, another group started to organize open-air festivals under the banner of “Respublika.” The festival was still held in 2014, under conditions of “undeclared” war, with the goal of bringing together artists from the east of Ukraine. The festival took place in September, combining music, lectures on volunteerism and citizen empowerment, and live street art exhibitions. Respublika and Izolyatsia bring together Ukrainians from diverse geographic backgrounds and demonstrate the continuous use of creative initiatives. Their goals are to create dialogue among these different groups, break prevalent stereotypes, and provide emotional healing in the times of suffering.

Visual art not only helps document conflict, but it also facilitates in expressing political views, provoking reaction, and improving the surrounding environment. For the last three years a group of creative Ukrainians organized “Respublika,” an open-air 3-day festival in Kamianets-Podilskyi. The festival was still held in September 2014, and it aimed to engage Ukrainian artists from the east, such as the bands Jinger (Gorlivka) and The Patch (Lugansk). All proceeds went to neighborhood beautification in both the host city and other cities across Ukraine, specifically through the production of giant murals on grey, crumbling buildings. 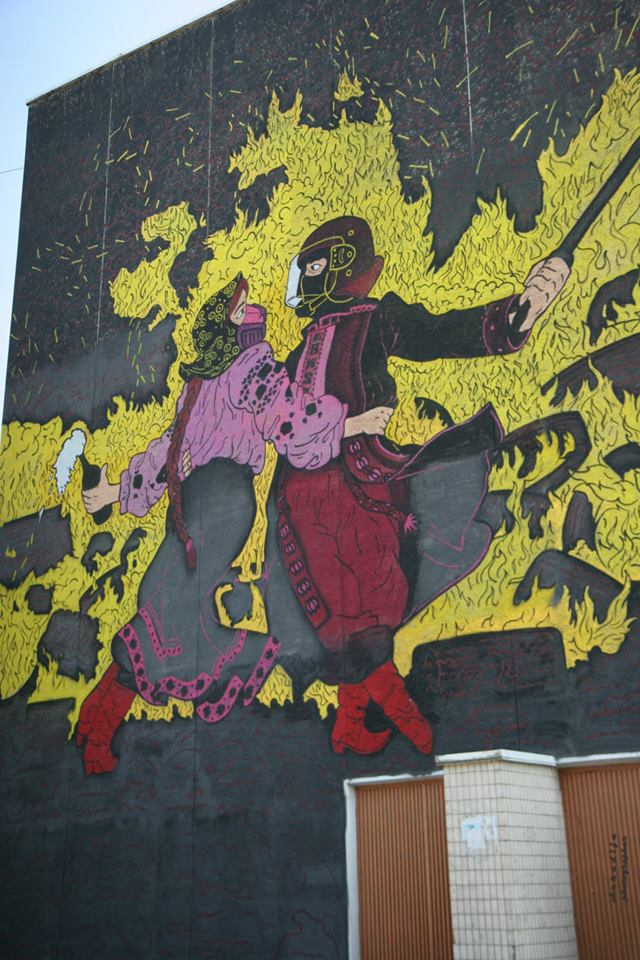 Art groups like “Drugyj Front” (Other Front), which originated during Maidan and is known for making patriotic tattoos and holding various exhibits related to the events in Ukraine, also joined the festival in 2014. The Donetsk group “Good people” has been transforming physical space in its home city with graffiti art for the last 3 years. During the festival many musicians from eastern cities performed together, donating the proceeds to humanitarian efforts in eastern Ukraine. One of “Respublika’s” organizers, Andriy Zoin stated that “every person from the east, whom we bring to our side, can also bring along about 100 people. I think that if this had been done for the last ten years, perhaps, this war would not exist.”

Overcoming Grayness
The physical landscape of Donbas region is gray and industrial. The region is a hub for mining. Today this grayness has morphed into black and red colors of violence, terror, and suffering. What if I told you there were other tints to this region; that its most valuable resource is not coal, but rather its people? Natalia Kaliada, the art director of the Belarusian underground theatre group Belarus Free Theatre, often states that Belarus is not a “sexy” subject on the international political agenda, since the country has no oil to export. But Belarusian people are its greatest resource. In contrast, Donbas is the industrial heartland of Ukraine, and today it is embroiled in political struggle and a war of aggression. But what if more people knew that Donbas has citizens who want peace and stability? For instance, over the past four years, Izolyatsia has brightened the industrial, Soviet past of Donbas with vivid graffiti on factory walls, art installations, musical events, and literary festivals.

The Donetsk-based organization collaborated on projects with international artists from the Netherlands, Poland, and China, to name a few. Also, Izolyatsia engaged Ukrainian journalists, musicians, authors, and architects in order to spark conversation in industrial Donetsk and stir youths’ imagination about their future through education. For one collaboration, an artist from Kharkiv worked with local children to paint murals on the walls of an active factory in Gorlivka (Donetsk region). Before implementing the project, the artist asked children about the changes they would like to see in their city. In response, they said their wish is to leave Gorlivka altogether. After the artist insisted on local changes, the children answered “better roads, and nicer policemen.” Anna Medvedeva, head of Public Relations for Izolyatsia, explained that the factory workers were initially skeptical about the appearance of the murals, but later they embraced the change. Medvedeva believes that, through such initiatives, children could send a message of hope and become inspired to make positive changes in their community. 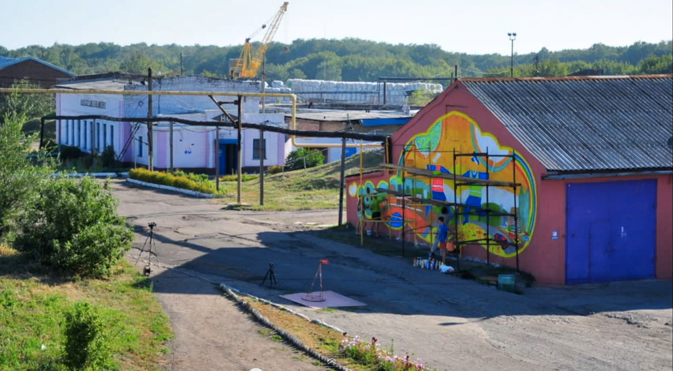 Now working in exile, Izolyatsia’s team coordinates activities from Kyiv. The organization implemented a series of public space projects entitled Zakhopennya (in Ukrainian language has two meanings—“forced seizure” and “passion.” The goal of the projects is to bring awareness about occupation in the east to Kyivans and visitors in the capital. The Izolyatsia team developed numerous art installations, some of which specifically involved refugees from Donbas. Their most recent project, “Living library of Donbas,” is based on the principle that “every person is an open book.” It aims to share the stories of Donbas natives who were forced to flee their homes due to concerns over safety. The participants recorded video appeals to promote the project. In one appeal, Alevtina Kakhidze, a Donetsk artist who now lives in Kyiv, referred to a Russian play entitled “Victory over the Sun,” explaining the title: “What does it mean to have victory over the sun? It means inventing electricity; mankind invented electricity but it did not help us at all. We have television and internet, and we thought that these things would help us to get to know each other better. Instead, all of this made us more distant. One can only know the truth from inside, or through real-life communication— to feel with own skin.” According to Kakhidze, this faulty exchange of information is the reason for the current information war.

Bringing East to the Center

This information war has had a deadly effect on the lives of innocent people. Some Ukrainian civil groups try to counter the immense propaganda machine through online portals such as Informacijnyj Sprotyv (Informational Resistance) and Stop-Fake. Such channels are useful in combatting Russian propaganda. But what is the role of art in this information war? Izolyatsia’s recent initiative provided a space for dialogue and self-reflection. The art installation “Deafness” took place in the underpass of a busy Kyiv metro station Maidan Nezalezhnosti (Independence Square). Among a series of stores in the underpass, one was designated as an artistic space. The store space featured a homey atmosphere with a coffee table, drinks, and a couch facing a projector screen. The screen displayed scenes from the anti-terrorist operation zone in Ukraine and other conflicts around the world. The set was open to any passerby. 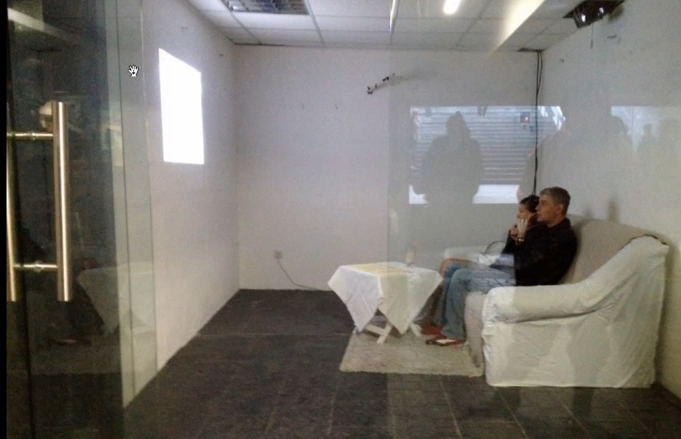 The purpose of the project was to recreate a home situation, and state of mind of Ukrainians who try to empathize or ignore events in the east. The organizer of the project, artist Katya Berlova said that today people feel a certain “inner discomfort not to participate in the events in eastern Ukraine” to juxtapose the Maidan revolution, which actively engaged so many Ukrainians. Today, the media’s portrayal of the war has created “deafness, which is a disease that allows people to move on with their lives,” says Berlova. This installation created a place for reflection on personal experiences.

Closer to the Sun

Culture during conflict is possible, and in fact, it is necessary. These cases of resistance art in Ukraine enabled live dialogue, self-reflection, political expression, conflict documentation, and healing. To this end, installations and street art can result in healing and social inclusion, and transform not only landscape, but also people’s thinking. How does public space affect a person? Izolyatsia curator Olena Chervonik said she could find very few coffee shops when she moved to Donetsk for work in 2011, and even in 2014 she could count them on her fingers in the city of almost 1 million people. Where, then, do young people meet and interact? Where do professionals have meetings? Where do other forms of socialization occur? Perhaps what Donetsk needed was a “coffee shop revolution” in order to create a social space and facilitate residents’ familiarization with their city, neighbors, and local community. In Kyiv, Maidan united different groups of people: from east and west, far right, Afghan veterans, women, young and old. These groups conversed and coexisted for a greater cause. The tent cities on the central square provided a space where people could make tea and soups, chop wood for heating, clean, write songs together, and more importantly collaborate and think together. This is art. Art of coexisting. Art of being a part of a society. Despite a stereotypical Ukrainian attitude “Moya hata z krayu, nichogo ne znayu” (“My house is far away and it’s none of my business”), the house is here and near, and only Ukrainian people can make “order” in their house.

Contested Ground: The Legacy of the Second World War for Eastern Europe