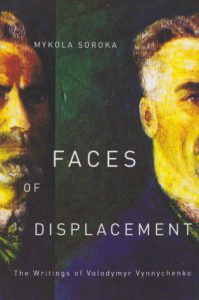 The objective of this study is two-fold: to contribute to the contemporary theoretical discussion about literature and the experience of writers abroad, in geographical displacement; and to present as a case study the writings of the Ukrainian writer Volodymyr Vynnychenko (1880–1951) from this largely neglected perspective. When I started the project, I confronted a methodological dilemma: whether to focus on a more established concept, such as exile, émigré, or emigration, or one of more recent vintage, such as diaspora, nomadism, or travel.  My initial intention was to follow the beaten path and work within the traditional framework of “exile studies.” However, upon starting the project, I encountered confusion in the debate among literary critics who tried to defend the exclusiveness of their point of view in the application of these concepts. For instance, Hallvard Dahlie classifies Henry James as an exile (5). Terry Eagleton sees James as well as Joseph Conrad as emigrants who chose “English society from the outside” and did not want to return (14). At the same time, a broader study of Conrad suggests that he can also be regarded as an exile, and his works can be seen as an attempt to transcend its bitterness (Gurko, Milbauer). Moreover, some have argued that Conrad can be viewed as a Polish writer (Mleczko in Morf, 234). In negotiating this terminological jungle, I realized that the “one-concept” approach, though it may be useful for addressing specific issues, would place excessive restrictions on the research methodology and impede the formulation of broader perspectives on the Ukrainian writer Vynnychenko.

The main reason for this problem is, in fact, that all these various terms occupy a common semantic domain, each with its own historical and linguistic origin, which leads to their constant intermingling and interchange. Among these terms I found displacement the most relevant concept for my study as it conveys a process with a variety of related qualities and characteristics. I consider the overarching methodological concept displacement as a blanket term that incorporates experiences in relation to geographical place—exile, émigré, expatriate, diaspora, emigration/immigration, travel, and nomadism. These terms represent various aspects of a geographical move outside the homeland—different faces of displacement. This allows us to study a given displaced writer not only as, say, an exile who longed for and was preoccupied with his homeland, but also as an expatriate who enjoyed his travels, a writer who sought integration into a new hostland discourse, or an uprooted nomad whose love of homeland extends to embrace the whole planet.

As a case study of displacement, I find the figure of Vynnychenko to be extremely fitting. The fact that this writer lived most of his life and wrote the majority of his works outside his homeland (he spent about thirty-one years in Ukraine and forty abroad) has remained largely unnoticed and barely conceptualized. Given Vynnychenko’s status as one of the most renowned and influential writers in Ukrainian literature, analysis of work has been conducted for the most part in the mainstream discourse, which often ignores tangential discourses. This phenomenon of marginalization is quite apparent in the study of Ukrainian diasporic literature. In Soviet literary criticism, the principle of Antaeus was applied: i.e., literature written abroad cannot be true literature because it is detached from the native social and cultural milieu (Soroka). Yevhen Shabliovsky, for example, substantiates his criticism of Vynnychenko as follows: “Taking Vynnychenko as an example, we are again persuaded that an artist who gives up his progressive principles and betrays his people cannot create anything considerable and significant, and he becomes like a sterile flower” (48). This approach was largely motivated by Soviet ideological prejudice toward so-called “Ukrainian bourgeois nationalists.” At the same time, a colonial approach was also at work: whereas Russian émigré anti-Communist writers (e.g., Ivan Bunin) were published in the USSR, the works of Vynnychenko—a former member of the Social-Democratic and Communist parties and insistent supporter of leftist ideals—were falsely lambasted as “bourgeois nationalist” (Shabliovsky).[1] On the other hand, certain circles in the diaspora considered Vynnychenko to be too left-leaning and modernistic. They refused to support the almanac Pivnichne siaivo (Northern Lights, Edmonton) after it published Vynnychenko’s novel, The Deposits of Gold (Poklady zolota) (no. 5, 1971). As a result, the almanac folded. Since Ukraine’s independence in 1991, another problem has persisted that can be called “metropolitan centralism”—a tendency to neglect peripheral phenomena, among which the perspective of displacement is often situated. For instance, the fact that the first Ukrainian utopian novel, When the Sun Rose (Koly ziishlo sontse) by Pavlo Krat (Paul Crath), was written abroad (in Canada, 1918), has been neglected. Similarly, late works about diaspora life by the prominent writer Ulas Samchuk (e.g., On Firm Ground [Na tverdii zemli], 1967) were not included in the post-Soviet History of Ukrainian Literature (Istoriia ukrainskoii literatury, 1994).

In the study of Vynnychenko’s works, scholars often consider his displacement as beginning in 1920, the year when the writer left his country permanently (Fedchenko, Shumylo, Syvachenko 1994; 2003; Revutsky), ignoring the first displacement in 1907–14, when Vynnychenko’s connections with his homeland were so strong that his presence in Ukraine was assumed. For example, Valerian Revutsky’s article “The Émigré Plays of V. Vynnychenko” (Emihratsiina dramaturhiia V. Vynnychenka) examines only plays written during the final migration, even though the title would imply all émigré plays.

Publishers in the diaspora have tended to prefer Vynnychenko’s early works and materials, which dealt primarily with Ukrainian topics or settings. For instance, two works on the Ukrainian–Russian conflict, the play Between Two Powers (Mizh dvokh syl, 1919) and the novel To the Other Side (Na toi bik, 1923), were republished in 1974 and 1972 respectively; the collection of children’s stories The Necklace (Namysto, 1930), in 1976; and the early diaries (Shchodennyk), in 1980 (vol. 1, 1911–20) and 1983 (vol. 2, 1921–25).[2] Vynnychenko’s last novel Take the Floor, Stalin! (Slovo za toboiu, Staline!, 1950) was first published in 1971 and focuses almost exclusively upon Ukrainian homeland topics. But his novel about Ukrainian émigrés in France, The Deposits of Gold, written in 1927, was published only in 1988. The play The Prophet (Prorok, 1929), which was first published in the West in 1960, focuses on non-Ukrainian locales and characters, taking the reader to India and the USA, and is thus an exception. It is worth noting, however, that the latter appeared together with stories set in Ukraine.

When it became permissible to write about the once-proscribed Vynnychenko, critics in Ukraine devoted attention primarily to his early works set in their homeland (e.g., Beauty and Strength [Krasa i syla], 1989; Selected Plays [Vybrani piesy], 1991). At the same time, some of his exile works were republished.[3] The novel The Leprosarium (Leprozorii), which is set in France, was published for the first time only in 1999 (Vitchyzna [Homeland], nos. 1–6; reprinted in a separate book in 2011). Also set in France, the novel The Eternal Imperative (Vichnyi imperatyv) is still waiting for a publisher as are the philosophical treatises Happiness (Shchastia, 1930) and Concordism (Konkordyzm, 1938–48) and twenty-three volumes of his diaries, which deal with the later period of his displacement (1929–51).[4]

Scholars such as Mykola Zerov, Semen Pohorilyi, and Volodymyr Panchenko, while disagreeing about various aspects of Vynnychenko’s writing, all identify three periods in his literary career: 1902–06, when the writer produced short stories that feature objective and impartial observations of life, primarily of the lower social classes (peasants, workers, hobos, criminals); 1907–20, with a focus on dramas and novels, indicating a shift toward analysis and experimentation, moral and philosophical issues, and a preference for ideas over description; and 1921–51, when Vynnychenko wrote socio-philosophical and adventure novels and philosophical treatises, with an emphasis on propagandizing his ideas through a more popular style. Overlooked by the critics is how these stages in the writer’s development correspond to the writer’s various states of displacement and how they can be logically explained by displacement.

It would be insufficient to argue, however, that developments in Vynnychenko’s writing were conditioned only by his stay abroad. In considering his evolution as a writer, the influence of the modernist fin de siécle period, as well as Marx, Darwin, Nietzsche, Freud, and others must be acknowledged. Vynnychenko as a writer was formed in turbulent times, when cardinal shifts in all spheres of life—social, cultural, national, religious—were taking place. As Virginia Woolf observes: “On or about December 1910 human nature changed… All human relations shifted—those between masters and servants, husbands and wives, parents and children. And when human relations change there is at the same time a change in religion, conduct, politics, and literature” (qt. in Bradbury and McFarlane, 33). Nevertheless, I maintain that displacement contributed significantly to the evolution of Vynnychenko as a writer—and directly determined his social, cultural, and philosophical outlook, ideological preoccupations, and his vision of society in his homeland, not to mention his attitudes toward his hostland and the world, as well as his choice of themes and settings.

[1] In the 1960s, following the partial democratization of political life and the rehabilitation of some writers in the USSR, there were attempts to publish Vynnychenko’s children’s story “The Winds Blow, the Wild Winds” (Viiut vitry, viiut buini) in a journal. However, after the story was printed, the entire print run of the journal was destroyed, and its editor was punished (Hrechaniuk, 192–4).

[4] All of these unpublished works are situated in the Vynnychenko Archive at Columbia University, New York (it was transferred temporarily to Princeton University, New Jersey). The Canadian Institute of Ukrainian Studies, based at the University of Alberta, has copies of his unpublished diaries. Some fragments appeared in the periodical press. Vynnychenko’s early writings are stored in various archives in Ukraine, in particular at the Institute of Manuscripts, Vernadsky Central Scientific Library in Kyiv (Fund 293) and in the Central State Archive of Ukraine (Fund 1823); some materials can be also found at the Taras Shevchenko Institute of Literature, National Academy of Sciences of Ukraine.

Negotiating Human Rights: In Defence of Dissidents during the Soviet Era: A Memoir by Christina Isajiw

Call for Papers: Dystopia. Journal of Totalitarian Ideologies and Regimes.