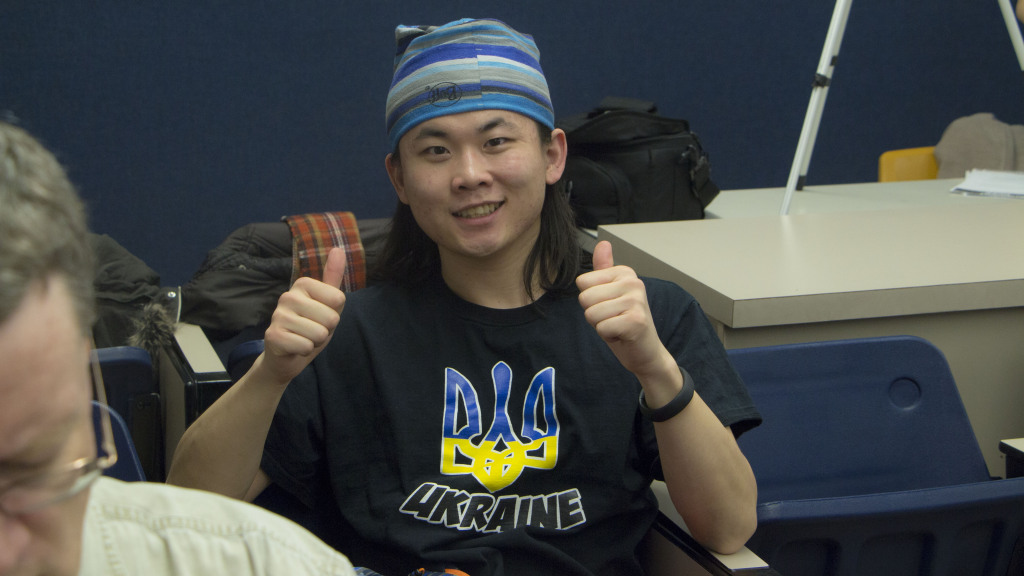 A student showing support for Ukraine

30 January 2015—On 27 January 2015, as part of International Week on campus at the University of Alberta, the Canadian Institute of Ukrainian Studies (CIUS) participated in two sessions devoted to the current war in Ukraine and the Euromaidan Revolution preceding it. The first session, on War and Revolution in Ukraine, opened with a sketch of the background by Dr. Bohdan Harasymiw, acting coordinator of the Centre for Political and Regional Studies at CIUS. 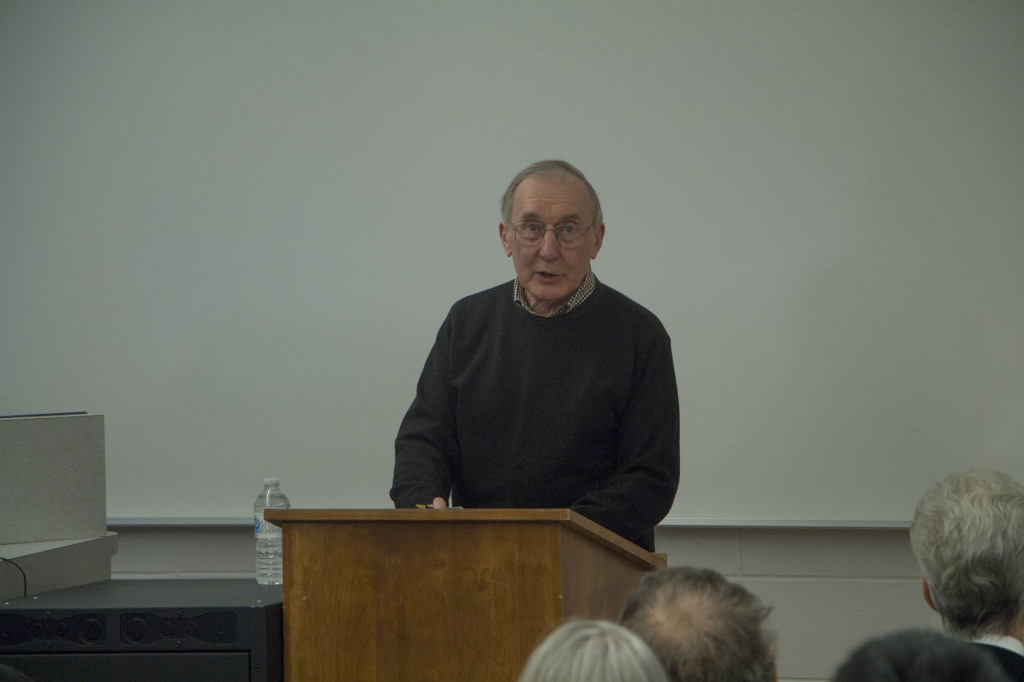 Bohdan Harasymiw opening the session on the Euromaidan

Recounting the course of events from the beginning of the Euromaidan demonstrations in November 2013 to the present day, he emphasized the unconventional nature of the conflict in eastern Ukraine. He reported that, according to the United Nations, from mid-May 2014 to 6 January 2015 at least 4,808 people had been killed, 10,468 wounded, and 634,000 internally displaced, with a further 594,000 fleeing to neighbouring countries, mainly Russia. Of the 5.2 million inhabitants remaining, 1.4 million were desperately in need of humanitarian aid. These casualties include 1,250 Ukrainian soldiers but do not include 6,242 Russian soldiers killed or missing.

Obviously, continued Dr. Harasymiw, civilians are bearing the brunt of the violence, as is usual in today’s wars. Like the others, this war, in his opinion, will be very difficult to resolve. In the war of words accompanying this violent conflict, its political nature is too often overlooked, especially by the Ukrainian government. Kyiv must make more of an effort, said Dr. Harasymiw, to win over the people of the Donbas politically “by making conditions of life easier for them, countering the pro-Russian propaganda, and treating refugees outside the conflict zone in a more humane manner.” 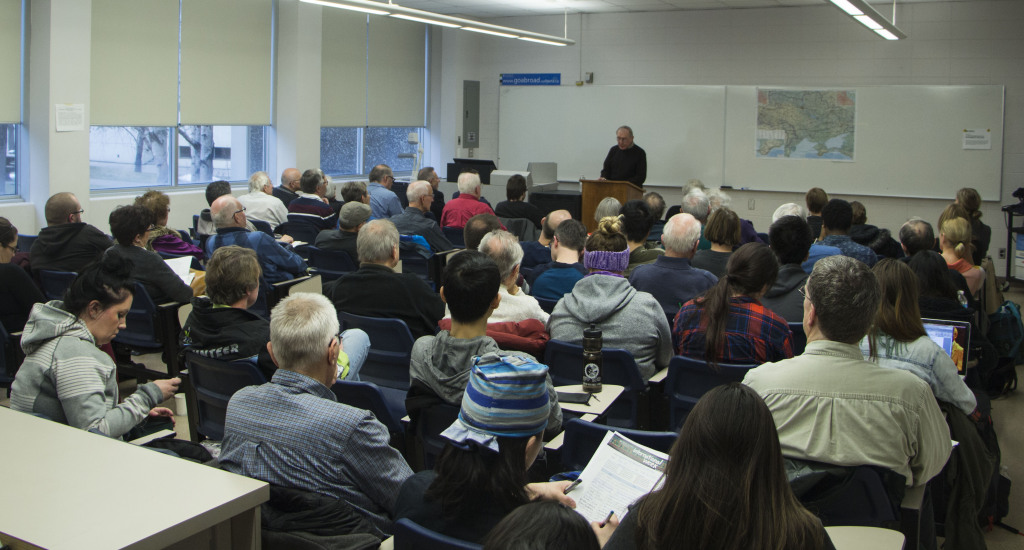 Dr. Harasymiw’s introduction was based on his presentation “War in Ukraine: Undeclared, Unacknowledged, and Unabated” in the CIUS seminar series on 20 January 2015. The text of his paper is available at https://ukrainian-studies.ca/2015/01/29/bohdan-harasymiw-war-ukraine-undeclared-unacknowledged-unabated/.

In his presentation, Dr. Oleh Ilnytzkyj of the Department of Modern Languages and Cultural Studies (MLCS) at the U of A, emphasized the cultural differences between Russia and Ukraine and how these became apparent during the Euromaidan events. He also pointed out some of the excesses in which officials of the previous Yanukovych government had engaged during the rule of that corrupt regime. The most important result of the Euromaidan Revolution, he stressed, was the change in the attitude of Ukrainian society from subservience to civic consciousness. 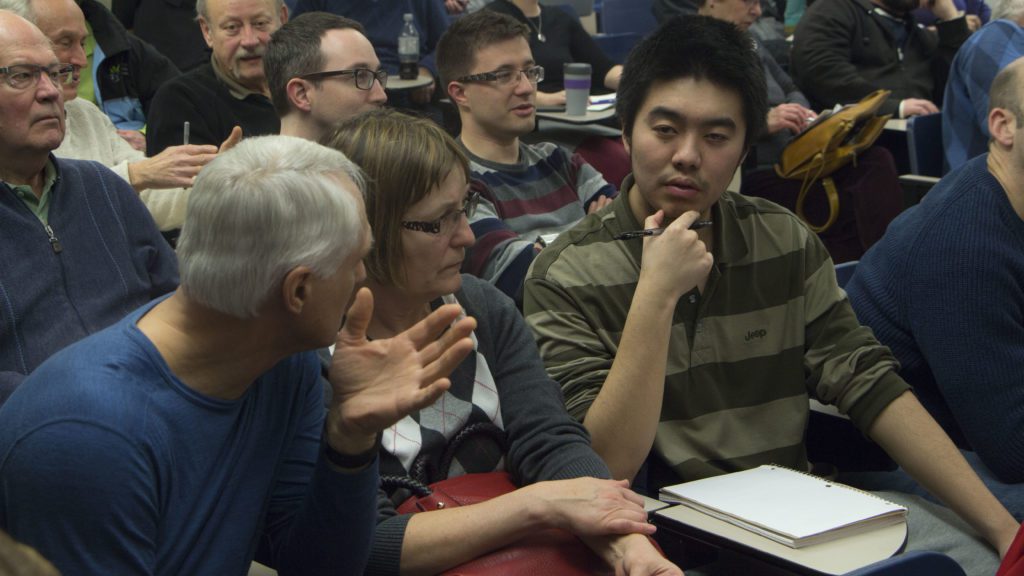 Lively discussion at the session

Drawing on a course about the Euromaidan co-taught with Dr. Ilnytzkyj in the fall of 2014, his colleague in MLCS, Dr. Natalia Pylypiuk, focused on the ecumenism generated by the Euromaidan Revolution. The extraordinary cooperation and collaboration among Christian clergy of all denominations, Muslim muftis, and Jewish rabbis was truly remarkable, noted Dr. Pylypiuk, especially their common efforts in developing a theology of courage and overcoming the colonial legacy of submissiveness. She emphasized that by working together, the various groups turned an ethnic nation into a political one embracing all ethnicities and religious backgrounds as proud Ukrainians.

Atiya Kanji, who took the course on the Euromaidan, offered an interesting comparison between the conflict in Ukraine and its long-standing Asian counterpart—the struggle for Kashmir involving India, Pakistan, and China. Despite the seeming hopelessness of both situations, she concluded with an optimistic prescription for resolving such conflicts, including mutual respect and understanding. Now pursuing her undergraduate degree in political science, as well as studying history, French, German, and Russian, Ms. Kanji hopes to study international law. 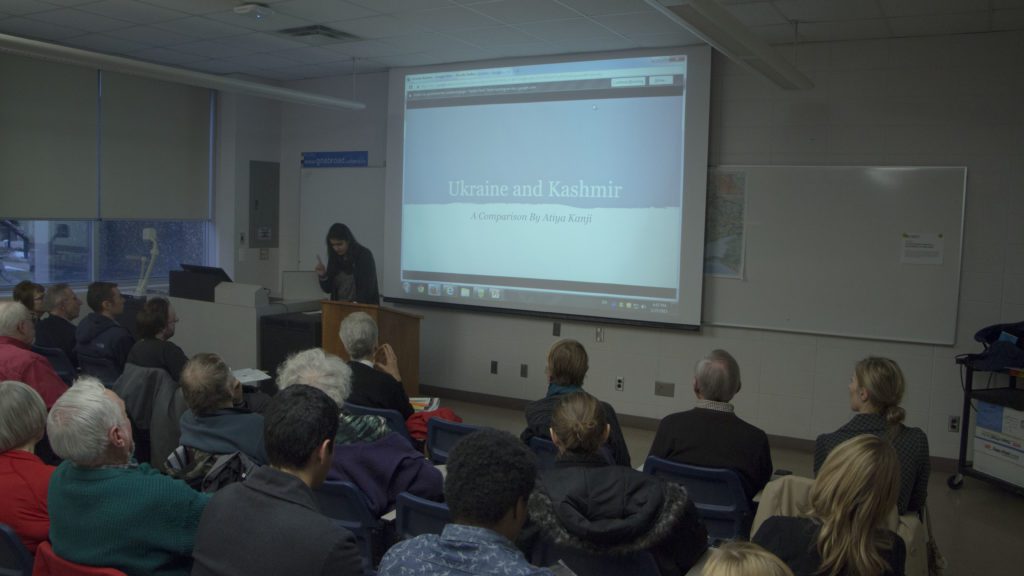 The second session featured a showing of the film Heaven’s Hundred, produced by the Babylon 13 studio. Briefly introduced by Jars Balan, administrative coordinator of the Kule Ukrainian-Canadian Studies Centre at CIUS, the film was followed by the comments of Drs. Ilnytzkyj and Pylypiuk, as well as historian Dr. Heather Coleman, director of the Research Program on Religion and Culture at CIUS. A lengthy and lively discussion followed with a keenly interested audience.