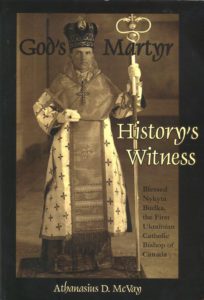 Biography of Bishop Nykyta Budka Launched in Edmonton 13 November 2014—“Every community has an obligation to allow its past to challenge its present.” With these words, the Reverend Dr. Athanasius D. McVay introduced his newly published book, God’s Martyr, History’s Witness: Blessed Nykyta Budka, The First Ukrainian Catholic Bishop in Canada, to a gathering of more than a hundred people at St. Josaphat’s Ukrainian Catholic Cathedral in Edmonton, Canada, on 24 October 2014. “History,” the pioneer bishop
told his flock in his first formal message, “is the teacher of life.”

Father McVay went on to note that in 1965 the Second Vatican Council’s Declaration on the Church in the Modern World asserted that “man is defined, first of all, by his responsibility to his brothers and to history.” Much the same had already been expressed by Bishop Nykyta Budka (1877–1949) four decades earlier, said Father McVay. “My responsibility before God and history is very great,” was the bishop’s declaration about his mission in Canada.
Among other things, Father McVay continued, the biography “tells the story of a human being complete with virtues and imperfections, of great successes and of crushing failures.” In spite of it all, he said, Bishop Budka was successful in fulfilling the mission entrusted to him—to sustain the faith among his people.

Bishop Budka departed Canada in 1928, and after the annexation of western Ukraine to the USSR he was imprisoned by the Soviet authorities in 1945. He was deported to Kazakhstan in
Soviet Central Asia, where he died in 1949. In 2001, Pope Saint John Paul II beatified Budka as a martyr. But even from the grave, Father McVay affirmed, the Blessed Martyr’s figure and accomplishments
would continue to inspire people. On 27 June each year, the author observed, thirteen million Catholics across Canada “commemorate a life of dedicated service that culminated in the supreme testimony of a Christian martyr’s death.”

The book launch was held as part of the Canadian Institute of Ukrainian Studies’ seminar series and was emceed by Jars Balan, administrative coordinator of the Kule Ukrainian Canadian Studies
Centre (KUCSC) at CIUS. Dr. Volodymyr Kravchenko, director of CIUS, brought greetings from the institute. Videoed greetings from the Metropolitan Andrey Sheptytsky Institute of Eastern Christian Studies (MASI), co-publisher of the book and a co-sponsor of the event, were delivered by the Very Reverend Dr. Peter Galadza from Ottawa. Orest Eveneshen, president of the Bishop Budka Charitable Society (BBCS), explained the role of that organization in the biography project and paid tribute to the late John Koziak (founder of the organization named for Bishop Budka) and the late Bill Diachuk, who as president at the time enthusiastically agreed to
the group’s involvement.

The project advisor, Dr. Serge Cipko of KUCSC, who is also with the BBCS, drew attention to the  acknowledgements page of the book, which lists contributing individuals and organizations. He mentioned the technical work performed by Ksenia Maryniak and the financial contributions made by individuals and groups besides the BBCS, such as the Ukrainian Canadian Foundation of Taras Shevchenko (Winnipeg) and the Stephen and Michelene Worobetz Foundation (Saskatoon). He also thanked the sponsors and organizers of the event.

Concluding remarks were given by the Most Reverend David Motiuk, bishop of the Ukrainian Catholic Eparchy of Edmonton, co-publisher of the book with MASI. Bishop Motiuk, the initiator of the biography project, noted that Father Athanasius took on the research and writing with passion and was a great storyteller. He “weaved a beautiful tapestry of a human being who made a great contribution to the Church in Canada and beyond” and who sacrificed his life as a martyr for the faith. Bishop Motiuk stressed the work and dedication of Father McVay in bringing the study, a work of more than 600 pages, to fruition. He then provided examples from the book.

the Most Reverend David Motiuk, bishop of the Ukrainian
Catholic Eparchy of Edmonton

One of them concerned a meeting between Bishop Budka and Pope Saint Pius X, in which the future saint told the young bishop: “Your diocese is the largest in the whole world. But I rejoice in seeing you so young. You have a very broad territory, so you can fly. You cannot do everything,  [so] do what you can.” The last sentence is a good mantra for each and every one of us to live by, said Bishop Motiuk.
Bishop Motiuk recalled that in his greetings, Father Galadza had wished Father Athanasius “Mnohiï libri” (Ukr.: many, and Latin: books) and noted that that wish was already on its way to
becoming true. Father Athanasius, announced Bishop Motiuk, has been asked by the Ukrainian Catholic bishops of Canada to write a biography of Metropolitan Andrei Sheptytsky, and beyond
that, another book on the history of the Church in Canada.
“Your people love the Most Blessed Virgin Mary,” Bishop Budka reported Pope Saint Pius X saying to him before he left Europe for Canada. After mentioning the Blessed Martyr’s role in the rebuilding of the Shrine of Mary, the Mother of God, in the Ukrainian village of Zarvanytsia, Bishop Motiuk closed the evening with the prayer “Bohorodytse Divo” (Hail Mary).

The book is available for $25.00 (plus postage) from the Ukrainian Catholic Eparchy of Edmonton
http://www.edmontoneparchy.com/contact-us/chancery-office

Negotiating Human Rights: In Defence of Dissidents during the Soviet Era: A Memoir by Christina Isajiw

Call for Papers: Dystopia. Journal of Totalitarian Ideologies and Regimes.