In a worst-case scenario, political-technological trickery could, after the first round of Ukraine’s upcoming presidential elections, unsettle social stability in Ukraine. Cynical puppet masters are prepared to risk the outbreak of a major domestic civil conflict for the sake of securing re-election of Ukraine’s incumbent president.

The relatively pluralistic political competition that emerged after the collapse of the USSR has seen the emergence of new political manipulation strategies outlined in Andrew Wilson’s seminal monograph Virtual Politics: Faking Democracy in Post-Soviet World (Yale UP, 2005). This type of distinctly cynical usage of various deception and falsification tricks for the sake of achieving an electoral victory has become known under the label “political technology” – a major vocation for thousands of alumni of post-Soviet “politology” departments. The roots of “political technology” go back to tactics of the KGB for promoting disarray, mistrust and factionalism among anti-Soviet dissidents and emigres. While the prime social function of traditional political science is to help making democracy work, the purpose of post-Soviet political technology is to prevent democracy from working as it is supposed to do.

What Is in a Name?

A major instrument of “political technologists’” ruses, over the last thirty years, has been to subvert fair political competition via purposefully misleading voters, via word games, about the choices they are making on election day. Post-Soviet politics has a rich history of the creation of pseudo-parties associated with names and programs specifically chosen to confuse electorates about the identities and ideologies of real competitors in elections. The, perhaps, most infamous such example is Vladimir Zhirinovskii’s ultra-nationalist “Liberal-Democratic Party” that the Soviet ancien regime invented in 1990, initially as a mere instrument, to discredit and obscure the real liberal-democratic movement emerging, in the late USSR, at that time. Since then, there have been hundreds of examples of elections, in the post-Soviet space, muddled by the appearance of so-called “technical” parties and candidates the names or/and programs of which sounded similar to those of some genuine political force whose electoral support they were designed to dilute.

One would have hoped that Ukraine has overcome this pathology, at least on the national level, after almost 30 years of independence, and its three pro-democratic upheavals since then, the so-called Revolution on Granit of 1990, Orange Revolution of 2004, and Revolution of Dignity of 2013-2014. Alas, this year’s presidential election sees a surprisingly egregious revival of dirty political deceit strategies, among them the use of, at least, two especially “technical” candidates. The 2019 presidential candidacies of the two political nobodies Yuri Tymoshenko, a volunteer soldier, and Yuliya Lytvynenko, a TV journalist, have clearly the purpose to confuse the voters on election day. Every Ukrainian citizen has, of course, the right to propose her or his candidacy, in the elections. Yet, these two candidates are such marginal political personalities that they are not even mentioned in most opinion polls published in the run-up to the elections.

The appearance of these two names on the ballot sheet that voters will be filing in, on 31 March 2019, is a plain attempt to mislead some of those who would like to elect Yuliya Tymoshenko. A certain amount of voters will probably make their marks on the wrong line, in the list of presidential candidates, and mark not Yuliya Tymoshenko, but the minions Yuri Tymoshenko or Yuliya Lytvynenko. To be sure, both of them have biographies that do not make them entirely inapt participants of Ukrainian politics. Yet, most Ukrainians would not be able to identify these two persons who have neither sharp public profiles nor a political organization or campaign, behind them.

The re-appearance of such dirty electoral manipulation strategies could be seen as a minor incident. But the phenomenon is noteworthy for, at least, three reasons. First, the successful registration, as presidential candidates, of Yuri Tymoshenko and Yuliya Lytvynenko would not have been possible without the silent approval from the very state that currently benefits from large-scale Western support. Ukraine’s president, parliament, government, general procuracy and electoral commission are permitting or even advancing this and other trickery, in the run-up to the presidential elections, in spite of their loud adherence to “Western standards” and “European values,” as well as pompous claim for soon accession to the EU and NATO. That this and other “political-technological” deceit is still being actively used in a country with a ratified and especially far-reaching Association Agreement with Brussels and a Strategic Partnership Charter with Washington should give Kyiv’s Western partners reason for pause.

Second, during the last two months, the manipulative candidacies of Yuri Tymoshenko and Yuliya Lytvynenko have, in view of changing opinion polling results, acquired a potential importance they had not had before. As a result of the sudden rise of the recent presidential candidate Volodymyr Zelenskiy, the competition for the second place during the presidential elections’ first round on 31 March has transformed into the major issue of this vote. According to surveys, Zelenskiy will most probably win in the first round. But, so far, it is an open question whether incumbent President Petro Poroshenko or challenger Yuliya Tymoshenko will take the second position – and thus also advance to the election’s second round on 21 April. Only the first two candidates in the March round have a chance to become elected president in the April final vote.

During the last weeks, opinion polls are producing contradictory results on who will come second in the first round. In some polls, Poroshenko is ahead of Yuliya Tymoshenko. In others, she takes second place after Zelenskiy while Poroshenko falls to the third position. The latter would mean that the incumbent does not make it to the second round and will have no chance for re-election. Poroshenko’s and Yuliya Tymoshenko’s shares of support in most polls, regarding the first round, are close or even very close to each other.

In such a situation, the hitherto irrelevant “technical” candidacies of Yuri Tymoshenko and Yuliya Lytvynenko have become politically explosive. That is because a scenario has become possible in which Yuliya Tymoshenko could come third in the elections’ first round, but may not be ready to accept such a result in view of the impact of the two “technical” candidates. An uncompromising stance by Yuliya Tymoshenko would gain legitimacy in the case that the difference between her voters’ support and Poroshenko’s winning result would be approximately similar or even smaller than the percentages acquired by the political nobodies Yuri Tymoshenko and/or Yuliya Lytvynenko. The problematic aspect of such an outcome would be especially grave, if Poroshenko would then go on to win, in the second round, against Zelenskiy. In such a case, it would become plausible to argue that Yuri Tymoshenko and/or Yuliya Lytvynenko stole Yuliya Tymoshenko’s presidency.

To be sure, Ukraine has its way to deal with such a situation. In autumn 2004, the Ukrainian elite and population did not accept the results of the second round of the presidential elections fraudulently won by Viktor Yanukovych. What followed was a two-months electoral uprising that became known as the Orange Revolution – which was, by the way, principally led by Yuliya Tymoshenko. The second round of the elections was repeated on 26 December 2004, after which Petro Poroshenko’s then patron Viktor Yushchenko was duly inaugurated as President of Ukraine, on 23 January 2005.

Against the background of this and other Ukrainian uprisings, it is not unlikely that, in case of a dubiously obtained electoral advantage for Poroshenko, Ukraine could see new mass protests by disenchanted Tymoshenko voters. If the difference between Poroshenko and Yuliya Tymoshenko will be smaller than the share of voters for Yuri Tymoshenko or/and Yuliya Lytvynenko, hundreds of thousands of demonstrators across Ukraine could start demanding a repetition of the elections’ first round. A crucial difference of such a new uprising from that of 2004 would not only be that, given the enormous amount of fire weapons nowadays circulating among Ukrainians, it could easily turn violent.

After Me the Deluge

A third and the major worrisome aspect of the candidacies of Yuri Tymoshenko and Yuliya Lytvynenko is that such potentially explosive political manipulation happens at a time when Ukraine is in a war for survival. To be sure, the probability of the above scenario is low. Most likely, Poroshenko will either come third. Or he comes second and the margin of his lead, compared to Yuliya Tymoshenko’s result, will be sufficiently significant to avoid fundamental questions. In such a case, Yuliya Tymoshenko could – at least, in that regard – not plausibly claim that the voters were deceived and the elections stolen via this particular “political technology.” An ambivalent situation would only emerge, if Poroshenko overtakes Yuliya Tymoshenko with a very small margin – a constellation that will hopefully not emerge.

Yet, the likelihood of this outcome, in the first round, does not equal zero. While the odds of such a scenario are certainly small, the stakes are massive. A major conflict inside Ukraine between pro-Western forces, who may even end up using firearms, would lead to ecstatic celebration in Moscow, and deep frustration in the West. Worse, large civil unrest in Ukraine could provide the Kremlin with a window of opportunity to snatch another chunk of Ukrainian territory, or even crush the Ukrainian state in its entirety. Again, this is not likely to happen, but cannot be fully excluded, in the case of an obviously illegitimate loss by Tymoshenko, as a result of dirty “political technology.”

The fact that the current power-holders are ready to run such an – even if only improbable, yet – enormous risk in order to preserve their power is not encouraging. It is a stark illustration of the continuing rapaciousness, immorality and pseudo-patriotism of the loudly pro-Ukrainian incumbent clan nowadays dominating, in Kyiv. Most Western observers hope for a continuation of Poroshenko’s presidency after April 2019. Their expectations of his possible second term should, in view of the dangerous tools Poroshenko’s “political technologists” have been employing to achieve it, not be high.

ANDREAS UMLAND is Senior Non-Resident Fellow at the Center for European Security of the Institute of International Relations at Prague, Principal Researcher of the Institute for Euro-Atlantic Cooperation at Kyiv, and General Editor of the ibidem­-Verlag book series “Soviet and Post-Soviet Politics and Society” distributed by Columbia University Press. 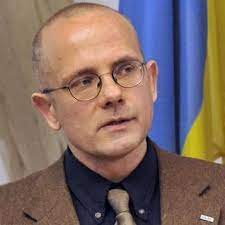 Andreas Umland is Research Fellow at the Stockholm Center for Eastern European Studies at the Swedish Institute of International Affairs, Senior Expert at the Ukrainian Institute for the Future, Associate Professor of Political Science at the Kyiv-Mohyla Academy, and General Editor of the book series “Soviet and Post-Soviet Politics and Society”  as well as Collector of the book series “Ukrainian Voices” both published by ibidem Press in Stuttgart.