Four North American online magazines (Foreign Affairs, Foreign Policy, The National Interest, and The Conversation) were selected to prepare this report on how the situation in Ukraine has been portrayed in the media during the past week (21–27 March 2022). The sample was based on their impact on public opinion as well as their professional reputation, popularity among readership, and topical relevance. Overall, the four magazines may be said to represent the centrist, liberal, and conservative political spectrum.

Topics featured in the publications:

The most common arguments made by the analysts:

Russia is unable to achieve a decisive victory in Ukraine and this casts a shadow on its global status: “Whatever the final results in Ukraine, Russia has shown itself to be far less than a great power. Putin’s total control over the state provides him no alibis for failure, for lack of grand strategic thinking and for poor military preparedness … Mass terror bombing of cities and civilians will convince no one of Russia’s prowess” (Steven Philip Kramer, The National Interest).

Russia raises the stakes to secure its victory in Ukraine by all means necessary. This includes the deployment of chemical and biological weapons, which seems plausible considering the fact that Putin authorized the use of such weaponry in Syria, as well as against his political opponents—Litvinenko, Skrypal, Navalny, and others (Michael T. Osterholm and Mark Olshaker, Foreign Affairs).

In the fourth week of fighting the Russian side changed its objectives in Ukraine. Instead of the initially declared “denazification” and “demilitarization,” which had anticipated a fast conquest of the capital and removal of the government, Russian officials now emphasized that their major goal had always been to “liberate” the Donbas. That said, the Russians are aiming to establish a better grip on the Donbas in order to use it as the staging ground for a future assault on Kyiv (Mark Episkopos, The National Interest).

The resolution of the Russo-Ukrainian war will likely be diplomatic and inconclusive. It will fail to neatly resolve all the misunderstandings, giving scope for diplomatic, military, and social manoeuvring in future. On the one hand, Putin will not accept defeat and will not acknowledge mistakes. On the other hand, the Ukrainians will not capitulate but neither will they be able to defeat the Russian army in combat. Meanwhile, the West will not directly engage, making a decisive victory impossible (Graham Allison, The National Interest).

The forthcoming peace deal will incorporate hard compromises. Joining NATO will likely be ruled out for Ukraine, yet neutral status will allow for its close cooperation with the West, up to gaining security guarantees from the USA. For its part, the Kremlin will promote the “independence” of annexed territories while heatedly contesting reparations and increased Western sanctions (Thomas Graham and Rajan Menon, Foreign Affairs).

Western sanctions may fail because Russia is too strong. Up to now, the EU and US have been introducing sanctions against much smaller and less potent states than the Russian Federation. Europe’s dependence on energy resources and inability to rapidly switch to new suppliers may trigger “grave political and material fallout.” The West may fall victim to its sanctions, and that may encourage it to become more lenient toward Russia (Nicholas Mulder, Foreign Affairs).

In the case of a coup d’état in Russia, “a new leader could be more willing to talk but would hardly be interested in surrendering, given the risks that would pose to remaining in power” (Thomas Graham and Rajan Menon, Foreign Affairs). As for those who could carry out the coup, Lisa McIntosh Sundstrom (The Conversation) points to “economic leaders, the Russian military, or state security services.” However, Sundstrom’s belief that the coup should be ignited and legitimized by Russian citizens is infeasible, if one considers public opinion in contemporary Russia.

Ukraine may become a place where Russia deploys chemical and/or biological weapons, thus putting all of the West in danger. In this light, Ukraine and Ukrainians constitute the forefront of Western security, and therefore Europe and the USA should support them with vaccines, antibiotics, antidotes, and gas masks against “state-sponsored attack.” The West should keep one step ahead of this situation and anticipate the unthinkable, provide logistics, and identify proactive strategies (Michael T. Osterholm and Mark Olshaker, Foreign Affairs).

Ukrainian resistance against the invading Russian troops remains resolute and effective. Few analysts expected the Armed Forces of Ukraine (ZSU) to be that successful (notably, this is a major leitmotif running through all the analytical pieces). Meanwhile, the West has become more unified and deliberate in supporting Ukraine by providing weapons and imposing new sanctions on the Russian Federation. In turn, Putin’s Russia continues to destroy property and deliberately kill civilians as no other “winning” options are feasible at the moment (Alexander Hill, The Conversation).

Russia has yet to demonstrate its combat capacity. The key narrative here is that the Kremlin has not deployed all of its troops and is likely to overcome Ukrainian resistance in future: “But whatever happens in Ukraine, Russia will still be a nuclear power, and it will retain Europe’s largest conventional military … but without [US and EU] direct involvement in the war … Ukraine will not enjoy an outright victory and Russia will not suffer an outright defeat” (Liana Fix and Michael Kimmage, Foreign Affairs). “The Kremlin will commit as many forces as it needs, for as long as it needs, until it eventually succeeds in imposing its desired military solution in Ukraine” (Mark Episkopos, The National Interest).

These statements sound dubious given major problems with logistics in the Russian army, as well as the low motivation of the invading troops, high casualties, and pervasive corruption. For a good insight into the state of the Russian army, consider reading this article by Kris Osborn (The National Interest).

The political and diplomatic weight of Ukraine is downplayed by default. When discussing scenarios of how to end the hot phase of the war, analysts give priority to Russia’s demands (as presumably the superior power), not Ukraine’s. The government in Kyiv is seen as a subordinate actor navigating the state “to a probably unsatisfactory peace” (Liana Fix and Michael Kimmage, Foreign Affairs). The most likely scenario is seen to be a provisional peace between Ukraine and Russia that will last while Putin remains as president.

The “unsatisfactory peace” scenario envisions that Ukraine will lose control of more of its territory and remain a victim to military blackmail, yet on the other hand will save citizens’ lives, acquire an economic impetus, and develop security cooperation at the international level. In promoting this scenario analysts deftly overlook the sovereign will of the Ukrainian people, not to mention the motivation of Ukraine’s government and military to continue defending their land. For good insight into the recent objectives of the Ukrainian side, consider reading articles by Maksim Nechiporenko (The Page), as well as Oleksandra Deineko and Aadne Aasland (Forum for Ukrainian Studies).

Economic sanctions imposed on Russia for invading Ukraine downplay Ukraine’s interest in retaining these sanctions. The focus is usually on bilateral economic relations between the global and the Russian actors, pushing Ukraine out of the frame. The losses of the West and Russia are highlighted and compared first. The message is furthermore that continuation of the sanctions will cause “a cascade of material shocks that will demand far-reaching stabilization efforts” from the West (Nicholas Mulder, Foreign Affairs).

Meeting economic objectives by the West is prioritized over the protection of liberal and democratic values in Ukraine to which the West is the champion. The analysts tend to overlook the fact that alongside the economic prosperity the founding documents of the European Union and Council of Europe highlight the ultimate importance of the rule of law and human rights. Economic interests are mentioned incomparably more often than political liberties. The specific economic interests and sufferings of Ukraine are not given enough credit regardless of its being directly hit by the war.

A long-lasting normalization of Russian-Ukrainian relations is possible only through redesigning the Western security architecture and accommodating the Kremlin’s demands. Hugh De Santis (The National Interest) argues that the Russian authorities will sooner or later be approached by Western leaders, including the leaders of Ukraine, to find a new common ground for harmonious coexistence. When that moment comes, Russia should not be punished too severely, akin to Germany after the First World War: “Even if Putin retains power, the objective of the United States and its European allies must be to end the military conflict and restart a dialogue with Moscow. Rather than treat Russia as a pariah, the focus should be on reintegrating it into Europe.”

The weak point of this argument is that Russia with its present politics and culture cannot be fully integrated into Western structures. Since the end of the Cold War, it has taken a different path of development and proclaimed different objectives compared to the post-Communist states that joined the “European family” as rightful members. Russia moreover cannot be reintegrated into Europe because it does not want to; its non-participation in the EU’s Neighbourhood Policy is but one eloquent proof. For more information, consider reading this article by Ostap Kushnir (Forum for Ukrainian Studies).

NATO enlargement to the east—and Ukraine’s membership in NATO—should be placed on hold. Putin is not likely to remove Russian troops without guarantees that Ukraine will not join NATO.

Ukraine’s NATO membership will not have a major impact on the security situation in Russia, which already shares borders with five NATO countries. For more details, consider reading this article by Hans Petter Midttun (Euromaidan Press). It is also worth mentioning some prefer to use the Russia-promoted term “expansion” with respect to NATO instead of “enlargement”; to avoid being misled, it is advisable to follow NATO’s own wording and/or consult this article by Daniel Ramallo (The National Interest).

Russia is as omnipotent as the USSR. This predisposition is taken as a given in many analytical texts.

Contemporary Russia lacks the industrial, ideological, and demographic potential to be equal to the former USSR. Moreover, during the last three decades, Russia has most often behaved like a “trade partner,” not a “menacing threat,” in its relations with the West.

Referendums in Crimea and temporarily occupied territories should take place to determine their sovereignty allegiance.

In democratic societies, referenda are held before the acts of secession, not the other way around. The Western Australian Secession Referendum of 1933 or Scottish Independence Referendum of 2014 are illustrous here. In the context of occupied territories of Ukraine, such referenda are impossible to accomplish in a free and fair way: a significant number of residents have become displaced; a significant number of residents have arrived from Russian mainland; there is no free speech in the Russian-controlled media space; Russia will not agree to referenda being administered by an unbiased authority; the legitimacy of any referenda conducted in the time of war is dubious. 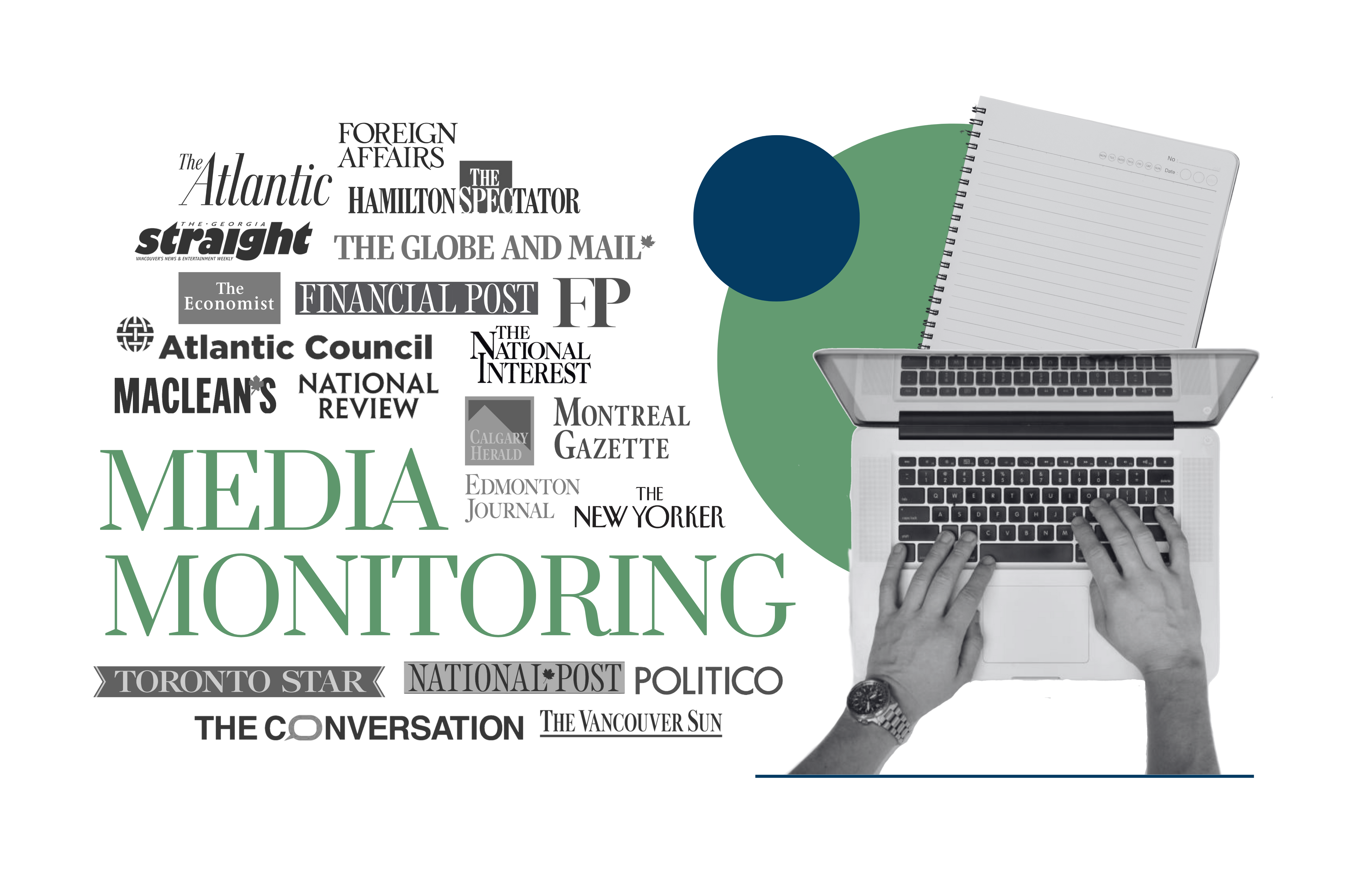 Media Monitoring Service (MMS) critically assess dominant narratives, including a special focus on disinformation, in selected key Canadian and US publications regarding contemporary Ukraine. The purpose of MMS is to inform experts and the general public about how Ukraine and Ukraine-related events are covered and reported on and to alert them to contentious ideas and claims that may be perpetuated in the media to Ukraine’s detriment. Read more